The Doctors and team at Alburtis Animal Hospital wanted to take a moment to reach out to you to offer our hand in partnership and ask for your help as we work together to care for your animal family.

Would you like to switch to the accessible version of this site?

Don't need the accessible version of this site?

On behalf of the staff at Alburtis Animal Hospital, we are honored to pay respect to our beloved animal friends who have passed.  We also welcome you to create a lasting tribute for your beloved pet or animal friend on our website's Pet Memorial page. Please feel free to complete the following Pet Memorial Form in Adobe Acrobat format, which requires the free Acrobat Reader to view.

If you have lost a pet who was a special part of your life, and you are struggling with grief, or if you just want to join with other pet owners who have experienced that kind of loss, the University of Pennsylvania Veterinary Hospital has nice grief counseling and pet loss support services.  Please check out the link below for more information.

Falko Zingley:  We adopted Falko at age 8 weeks, thinking a hypoallergenic breed would be best suited for our allergic family. His sweet disposition & calm demeanor was evident to all who met him.
One year later, we adopted his housemate, Axel, who he learned to tolerate. Falko enjoyed visits to Cold Nose Lodge, where the staff loved him. Most important to Falko were his people. He followed us everywhere, and showed his enthusiasm when our kids came home from college. Falk spent most 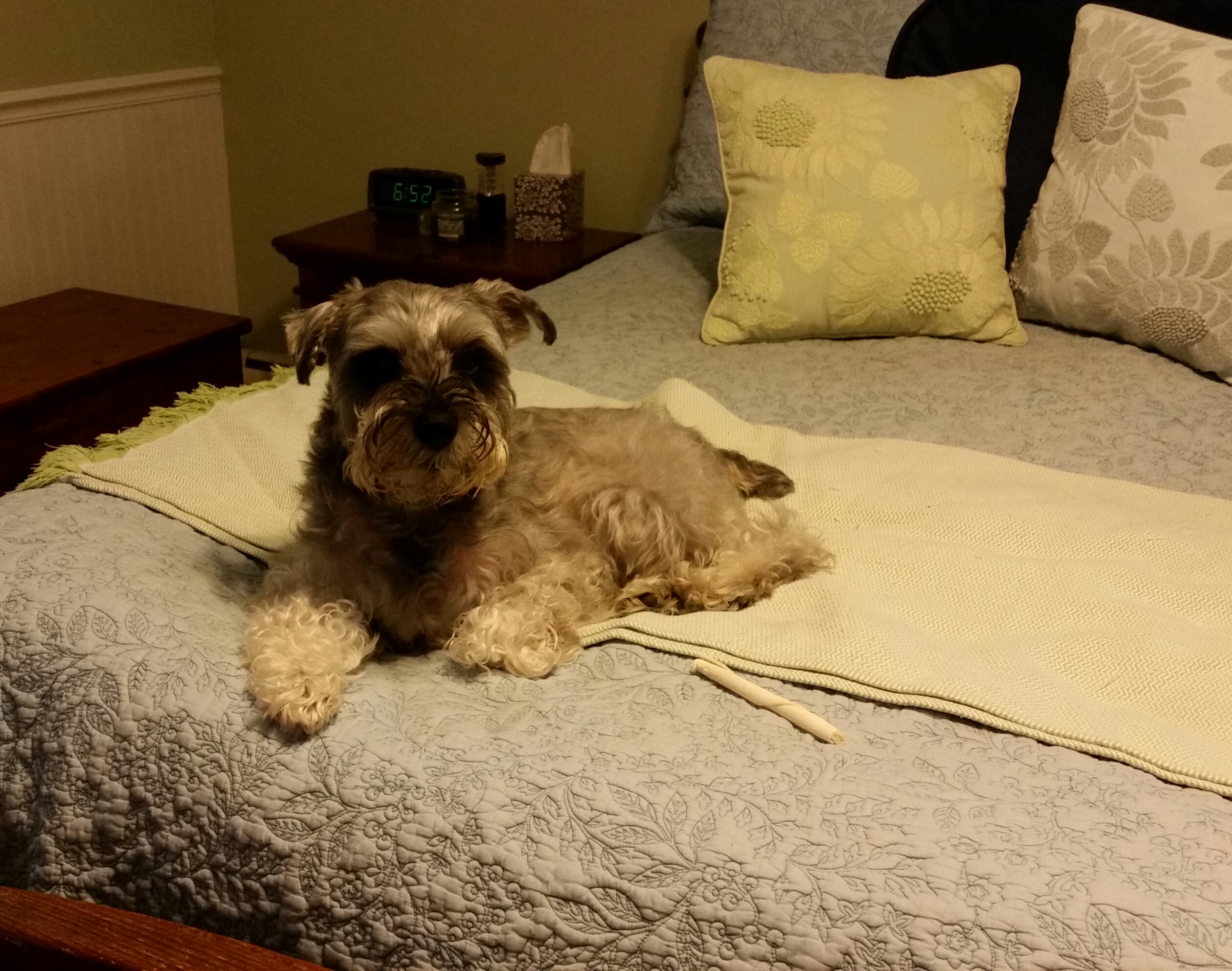 Sundays lying on the dining room floor, watching me in the kitchen as I prepared meals for the week, which earned him the knickname of "Sous Chef". When I accepted a remote job, Falko took over my home office, and spent all my work hours with me.
Falko was a beloved family member and we were anticipating him living out his senior years with us as empty nesters. Very unexpectedly, on 09 Apr 2018, Falko was diagnosed with a very aggressive and fatal form of cancer. Despite two rounds of chemotherapy, the disease rapidly progressed. While his health deteriorated, Falko continued to be a constant companion. On 25 May 2018, Falko was humanely euthanized, and brought home to his final resting place in our backyard. We will miss his gentle spirit and quiet companionship, and will love him forever.

Mango Shade-Dixon:  Mango may not have been with our family long but he made everlasting imprints on our family. He taught his 9 year old (stubborn) brother to use the scratching post, which we have been trying to do FOR YEARS. Mango also made us realize that we have so much love to give to any animal that comes 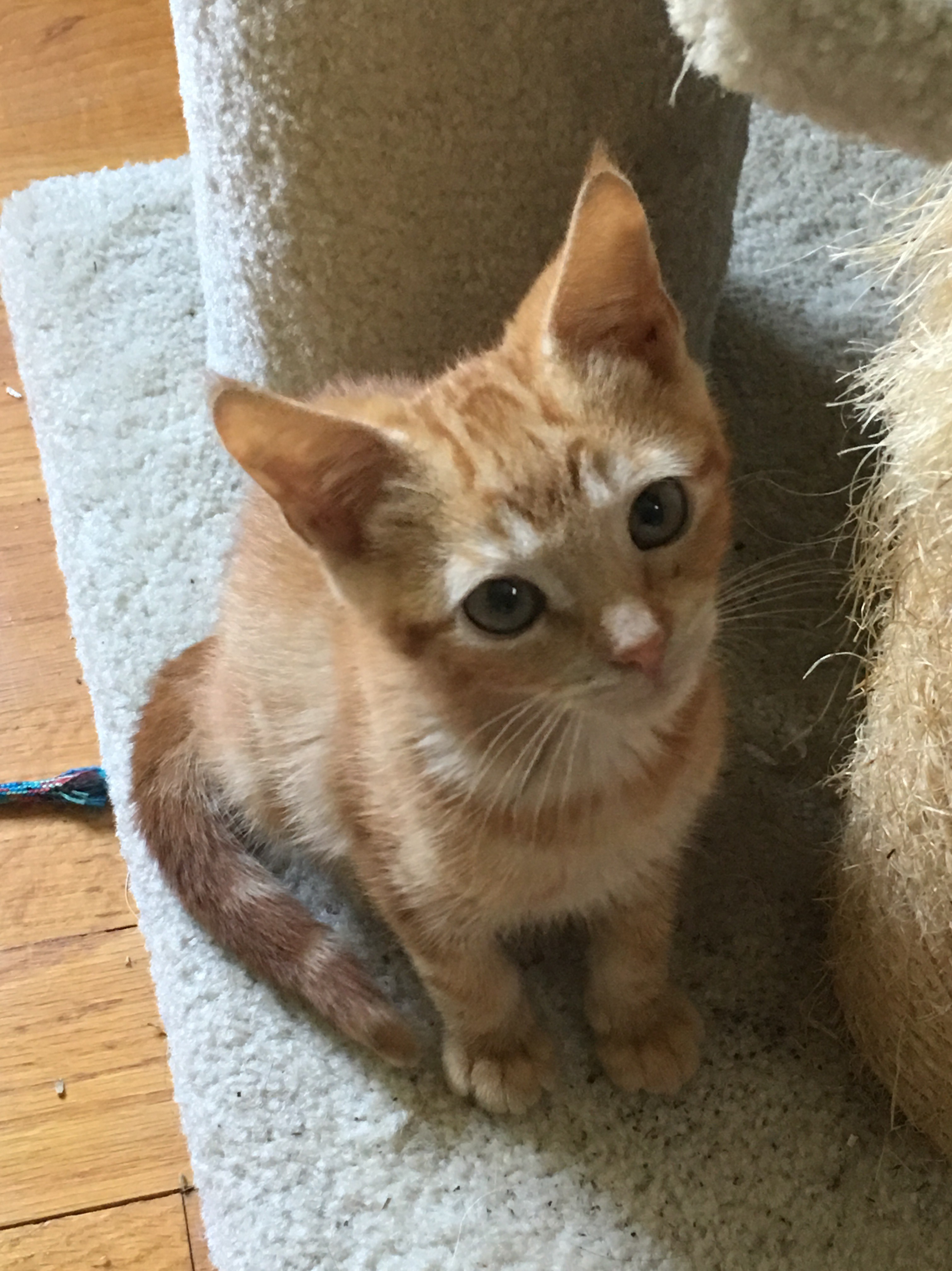 Mango was diagnosed with FIP in September and we just could not take that diagnoses to heart. We tried everything to make sure he made it through this terrible disease, even trying to get other opinions and other tests in hopes that he would live. FIP has a high death rate with almost every case not surviving. Mango was a fighter until the end, he was the sweetest baby anyone could ask for.

Mango would wait patiently for Nick to come home from work everyday. He would wait at the top of the stairs and just purr until Nick would pick him up and carry him all over the house. He slept on him every single night. Mango suddenly fell ill and we rushed him to the vet where he received medication. He fell ill again experiencing seizures that just would let up. Finally, on 11/3/17, he had his last and final seizure. We rushed him to an emergency vet where they sadly told us that his body was shutting down and there was nothing further we could do. Mango passed away peacefully in the arms of the people who loved him most.

Mango taught us that love is forever, unconditional and that we have plenty to give in this world. Please always love the pets you have and pray that they never fall ill and give to those who do fall ill. No matter what, animals are family. Do whatever it takes to make them feel safe and loved.

We will always love you sweetie boy,

Max Mohr: Max, you dedicated all 14 GREAT years of your life to us and with tears flowing and a heavy heart we want to say THANK YOU for all the joy you brought to our family. The thing you loved most was going to the lake house. You were always the first one in the water. You greeted everyone

with a wagging tail and were always happy to see someone. Yeah, so, growing up you escaped from your puppy crate and ripped apart the living room sofa and a roll of paper towels making the house look like it was ransacked by burglars. You gave me those big brown puppy eyes, wagging you tail as to say.. sorry but that was fun.

We love you and always will. We will MISS YOU.

Brogan Riggs:  Brogan was a friendly, in your face type of cat. He was always in the room where the action was. We adopted Brogan and his litter mate Murphy a few months after the passing of our cat of 16 years. Brogan was a force. He would force his way into everything and closed doors were not a barrier. He had to have given himself countless headaches with this philosophy. Yet, Brogan was great at giving advice we all could and should live by. Brogan's first valuable piece of advice was how to stay cool during the summer heat. He did this by forcing his way into the refrigerator (a cool place), finding a spot and refusing to move. Another example of Brogan's wisdom was to always make sure you enjoy life and have fun. This advice was given by sticking his head into and getting it stuck in a party cup. He truly was wise beyond his years.

Unlike his brother, Brogan loved attention and affection, whether he was giving it or receiving it. This is the type of cat our family enjoys most. Brogan and his brother also provided entertainment that we called "dinner and a show" and that was provided regularly when the family was eating dinner. It seemed as soon as we started eating the wrestling match would begin. The WWE has nothing on these two brothers.

Our time with Brogan was short as he passed in March of 2011 from FIP. Murphy would succumb to the same evel disease in September of 2012. This family can honestly say that we hate FIP! Since Brogan had the worst form of the disease, watching it take him was so hard. Murphy's passing was much more peaceful. We planned on having these two brothers with us for the next 15 years or more, but that was not to be. But we know that we gave them a happy and loving home and we know that they loved us for it.

We miss you and love you Brogan!

Murphy Riggs: Murphy was a shy cat at home. He was afraid of everything, even his own shadow. At the vet's office, the wild beast would come out as well as the muzzle. We could never believe that our Murph could be like that. Murphy was a loaner which was a different personality type for us. His rules were simple: No touching and I love you but from a distance. He did not like attention and you could see the fear on his face if he thought you were coming his way to "force" attention on him. He despised being the center of attention. However, when he decided he wanted affection he would stalk you down and the word "no" or "I'm busy" was not an option.  It was all on his terms.

Murphy was funny without even meaning to be. We adopted a kitten last year and the kitten would not leave him alone. We saw him carrying the kitten from the kitchen to the living room where the family was sitting. I never thought I would have to say the sentence, "Murphy, spit your brother out of your mouth!" Murphy loved to sit on the front porch during the warmer months with us and take a nap or explore the front and side gardens. One of Murphy's greatest loves was a box. If there was an empty box in the house, Murphy was in it! I will miss saying the phrase, "Look it's a Murphy in a box!"

We will miss our porch buddy.  Our Murphy. We love you and miss you so very much, Murphy. You gave us so much joy and laughs. You loved us from a distance but this distance is too far.

Albert:  Albert was one of our hospital cats who was born in our facility, along with his

eight litter mates, on Dr. Donovan's birthday in 1996. Though not as outgoing as Casper, he was an institution at the hospital, roaming the halls at his leisure. His name was chosen to remind us of the misprint in our very first Yellow Page ad. You can guess what that might have been. He sadly succumbed to an aggressive form of lymphoma in September, 2011.

Casper:   Casper was one of our hospital cats who used to be one of Dr. Donovan's house cats. It was discovered that his strong point was his personality, rather than his ability to get along with the OTHER house cat, so he began his career as a greeter and

reception desk loafer in the animal hospital, in 1995. Many of our clients grew to love (and ask about) Casper. He succumbed to a combination of problems related to hyperthyroidism, inflammatory bowel disease, and anemia.  He was indeed one of the world's most likable cats!

Cinnamon:  Cinnamon was a hospital cat at Alburtis Animal Hospital whom many newer clients may not have ever met since she spent the last couple years of her life hanging out upstairs in the animal hospital. She was originally adopted by Dr. Donovan from a client in 1993 and was eventually transitioned into a hospital cat. Cinnamon was a sweet cat who lived past 20 years of age and all of those who knew her will miss her.

Find us on the map